Every now and again we like to highlight the extracurricular activities of some of our teachers, and under the spotlight today are several who are involved with Kuwait’s vibrant theatrical and musical arts communities. 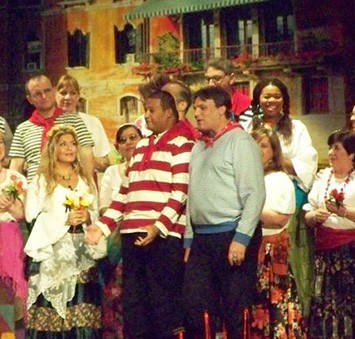 Since arriving in Kuwait, Year 3 teacher Mr. Brian has immersed himself fully into the local arts scene, first with the Ahmadi Choir, part of the Ahmadi Music Group, and more recently with the One World Actors Centre theatre group.

Currently, he is rehearsing with Year 4 teacher Mr. Andre for the Ahmadi production of Faure’s Requiem. This production will be performed in March at the newly opened opera house at the Sheikh Jaber Al-Ahmad Cultural Centre.

While with the choir, Mr. Brian has enjoyed performing in several Gilbert and Sullivan operettas including The Mikado and The Gondoliers (both with Mr. Andre) and the operas Dido and Aeneas and the prestigious Carmina Burana.

Mr. Brian has also performed in several Plays by William Shakespeare such as A Midsummer Night’s Dream, Julius Caesar (playing the title character), Much Ado About Nothing, Romeo and Juliet and the Merry Wives of Windsor (alongside another GBA teacher, Mr. Kane of Year 2).

“I hope to continue my association with GBA and the Kuwaiti arts scene for many years to come.”

At GBA, we believe that outside interests are important, especially if they involve the local community and have the potential to interest our pupils. This not only augments pupil learning but also encourages them to share their own interests.